Personalized Diet The Mediterranean Diet – It’s Not What You Think!

The Mediterranean diet has long been praised for its beneficial effects on health. It’s claimed to help prevent heart disease and diabetes, to boost brain health and improve body composition.

There seems to be abundant research showing that the “Mediterranean diet” can prevent – and even reverse – disease. In fact, a search at the National Library of Medicine returns nearly 7,000 results on the subject. That’s a LOT of studies!

Today, we discuss why the definition of the Mediterranean Diet is flawed (and why it’s virtually impossible to define in the first place). We’ll discuss why the conclusions about its health benefits are often misguided. And we explain the REAL reasons why the old-world dietary habits of this region seem to offer so many benefits.

What is The Mediterranean Diet?

The simplest definition of the “Mediterranean Diet” is the traditional foods and culinary customs of the populations who live in Mediterranean countries, including Italy, Greece, Spain, the South of France, Croatia, Turkey and even parts of Africa!

Of course, if you’ve ever been to any of these countries or regions, you know that these people do not enjoy a single homogenous diet. The foods and culinary traditions in this part of the world are extremely varied.

On the Italian coast, people commonly enjoy pizza, pasta and wine. In Greece, fatty lamb, rice and honey-sweetened baklava are the norm. In the South of France, butter-drenched croissants, rich liver pates and cheeses of all kinds are enjoyed regularly.

With the stark differences in the types of food enjoyed in these unique countries, there can never be a single definition of the “Mediterranean Diet”. And in the words of Dr. Miguel Ángel Martínez-González, M.D., Ph.D., Spanish medical doctor, professor and nutrition researcher at Harvard:

“The very definition of the MedDiet is not a minor issue.”

The Mediterranean Diet (According to Ancel Keys)

The concept of the “Mediterranean Diet” was first coined by Ancel Keys. You might remember Keys as the individual responsible for misrepresenting the effect of saturated fat on heart health back in the 1950’s.

Keys originally defined the Mediterranean diet as being low in saturated fat and high in vegetable oils, which he observed in Greece and Southern Italy during the 1960s. Keys’ Seven Countries Study claimed that this dietary pattern was associated with reduced risk of heart disease, compared to northern European countries and the United States.

It should be noted that Keys’ original research has been largely discredited, as it was discovered that he cherry-picked the data to achieve the end result he was looking for and discarded data that challenged his foregone conclusion.

In fact, according to Keys, the traditional Mediterranean diet included meat only about once a month or on special occasions. But as you’ll discover in just a moment, those numbers simply don’t add up.

Flawed as it was, after this research was published, the concept of the “Mediterranean Diet” gained momentum. But many researchers (and intelligent consumers) were left scratching their heads.

With so much variation in the diets of this region and so many inconsistencies in the methods used to evaluate and define the Mediterranean Diet, how could this research be scientifically sound?

In contrast to diets with clear and quantifiable standards, like the keto diet, the Mediterranean diet is very vague and loosely defined.

The Many Faces of the “Mediterranean” Diet

The general consensus description of the Mediterranean Diet emphasizes the same components:

However, there is considerable confusion about how often and how much of these foods are consumed, including many subjective terms for amounts including “abundance, high, moderate, low, some, and vast”.

Most recommendations lack specific suggestions for numbers of servings or serving size. And they do not specify the amounts of commonly consumed “additive” foods such as sauces, condiments, tea, coffee, salt, sugar, or honey.

This leaves a lot of gray area as to the true composition of a “Mediterranean” diet.

The Scientific Method or a Stab in the Dark?

For results to be considered scientifically valid, a scientist must to be able to reproduce an experiment and get the same results each time.

This concept of “replication” is what allows researchers in different parts of the world to test the hypothesis and verify the results. This transparency is vital. But with the Mediterranean Diet, we don’t have this reproducibility.

In fact, the authors of a recent systematic review published in Nutrition Reviews conclude that:

“There is good evidence the diet improves the lipid profile, endothelial function and blood pressure, but that one of the most limiting factors to drawing conclusions was discrepancies in how the MedDiet had been defined and formulated”

In other words, the authors conclude that the Mediterranean improves health measures… but they could not define the diet nor understand which components contributed to positive outcomes.

What About Meat in The Mediterranean Diet?

It is a common misconception that the Mediterranean diet is low in the consumption of meat. In fact, Keys original conclusions about meat consumption in these countries is clearly flawed. The numbers simply don’t add up.

Now, consider the amount of saturated fat in these common foods:

Does it seem even remotely reasonable that the populations in the Mediterranean ate meat only once per month… given that they are reported to have consumed up 35-50 grams of saturated fat daily?

Not by a long shot!

This discrepancy puzzled the meat-loving Australians, who recently conducted an experiment on the health benefits of what they call “The Mediterranean Pork Diet”.

Since Aussies are among the top meat consumers worldwide, the researchers wanted to see how a Mediterranean-style diet that included pork would impact health measures of older adults, at risk of heart disease and cognitive decline.

In this randomized study, participants were divided into two groups: a low-fat group and the Mediterranean Pork group, which included 250 grams of fresh lean pork each week in a “Mediterranean-style” diet. The participants followed each intervention for eight weeks, separated by washout period of the same duration.

Compared to the low-fat diet, the Mediterranean Pork Diet improved the subjects mental processing speed and uplifted their mood.

The interesting thing about the “Mediterranean Pork Diet” is that pork has been a staple meat in Mediterranean cuisine all along!

Pork Fat in the Mediterranean Diet

Sally Fallon and Mary Enig explore this in a piece titled, The Mediterranean Diet: Pasta or Pastrami?

It is also covered in detail in the 1935 book, Recipes of All Nations, which includes this description of food in Sardinia:

“One of their favorite ways of cooking macaroni is to cook it in either lamb or pork fat . . . with small pieces of either lamb or pork, chopped tomatoes, chopped garlic and curd, mixed with water and salt and moistened with game stock, if obtainable.”

The authors go on to state that gnocchi is traditionally flavored with saffron and “served with a tomato sauce or with gravy and cheese made from ewe’s milk.” Polenta is enhanced with “chopped salt pork, small pieces of sausages and grated cheese.” A dish called La Favata is made with “pieces of salt pork, cut in large chunks, ham bone and special homemade sausages…”

In other words, despite the widely held belief that Mediterranean regions derive their fat primarily from plant sources, the historical records and traditional recipes tell a completely different story.

These cultures prized and savored animal foods of all kinds.

Considering the importance placed on organ meats in traditional cultures, it seems remiss that the modern version of the Mediterranean Diet mentions nothing about these nutrient-dense foods.

However, historical cookbooks feature an extensive assortment of organ meat recipes and preparations. Organ meats were consumed regularly until the end of the Second World War, when livestock prices became more affordable.

Consider this excerpt from the magazine, Best of Sicily:

“Spleen burgers? A western Sicilian thing, but there’s hardly a region of Europe without its specialty food made from some kind of organ. Scotland has haggis, England has kidney pie, Germany has liverwurst and France has its fois gras. There was a time, long before the days of mass-breeding, when such giblets or “sweetbreads” were considered something tantamount to a delicacy. Tripe, made from beef stomach, used to be common in most of Italy. One of the more interesting Sicilian entries in this esoteric culinary category is roasted goat brain – admittedly a bit exotic – but poultry or calf liver seems to be part of the cuisine of many countries.”

Considering the widespread confusion among the scientific community on the very definition of the Mediterranean diet, and the blatant omissions of the traditional foods consumed in this region, we have to wonder:

What are the media, food and medical industries not telling us?

The Health Benefits of the Mediterranean Diet

With so many studies showing health benefits of the so-called “Mediterranean Diet” it is clear that there are some beneficial dietary factors at play. However, to get a clear picture of “cause and effect”, more control trials are warranted.

Based on my research over 20+ years, I believe there are five key factors which contribute to the health benefits of this diet:

And here are a few examples of meals I consider to be authentically Mediterranean:

I’d like to hear from you! What do you think about the Mediterranean Diet? What factors in this diet do you think promote health? 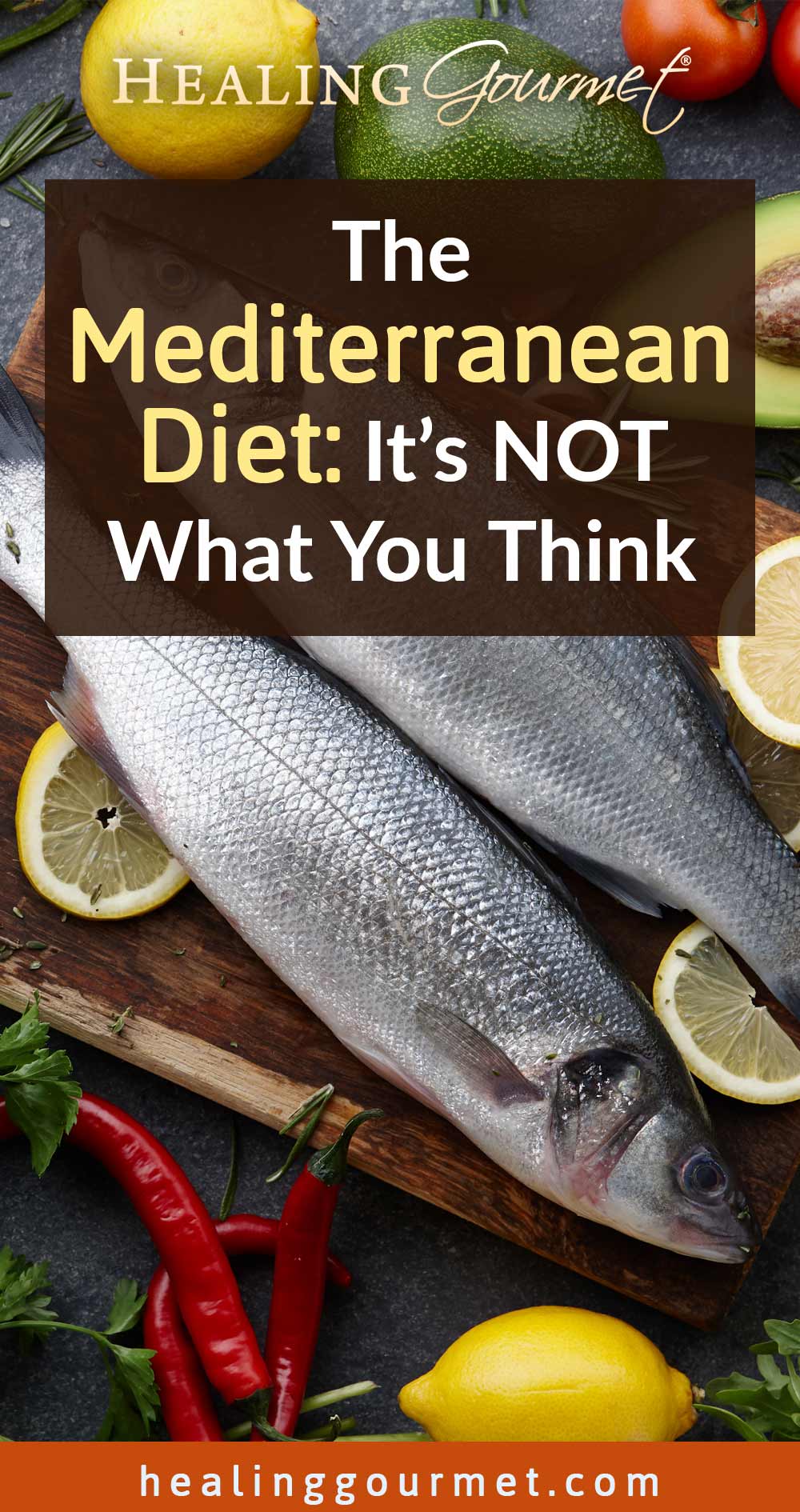 Can a Raw Diet Make You Sick?