In the early 2000s, most people had never heard of almond milk and sales of the product were virtually non-existent. But as more people became aware of food allergies and intolerances and began seeking “plant-based” alternatives to traditional dairy products, sales took off.

By 2016, the market for almond milk reached $1 billion. And its popularity continues to grow. Sales are expected to surpass $2.7 billion in the next four years.

But despite surging popularity, commercial almond milk is not all it’s cracked up to be. Considering the amount of almonds in each carton, the product is rather expensive. And many brands contain questionable ingredients that could harm your health.

So, let’s have a look at some of those ingredients – and why you might want to leave most commercial brands of almond milk on the shelf.

Then, I’ll show you the easiest way to enjoy almond milk without the questionable ingredients and with greater nutritional value… all while keeping more money in your pocket!

If you’ve read the back of an almond milk carton, you might have noticed a list of ingredients on the nutrition panel that aren’t “foods” – they are synthetic vitamins. The most common include Vitamin A Palmitate and Vitamin D2.

At first glance, this might appear to be a good thing. But synthetic nutrients are not in the form your body needs for optimal absorption. Even worse, these copycat versions can cause genetic damage and promote cancer. (ref, ref, ref)

The Sneaky Ingredients Manufacturers Use to “Thicken” Almond Milk

The “creamy” mouthfeel you might experience when drinking almond milk isn’t from the small amount of almonds contained in the product. Rather, it is the result of vegetable gums.

Gums are a class of substances known as hydrocolloids. These compounds absorb up to 20 times their weight in water. They help to thicken liquids and provide a creamy mouthfeel. And while this might be good for the bottom line, it may not be so good for you.

Many manufacturers use the ingredient carrageenan, derived from seaweed, to thicken their products. Carrageenan is so inflammatory and potentially toxic that the International Agency for Research on Cancer classifies it as a potential human carcinogen. (ref) This additive has also been found to promote leaky gut and damage the cells that line the intestines.(ref)

Other gums, including gellan, guar and locust bean gum, are also commonly used in commercial almond milks. These ingredients can alter healthy levels of intestinal bacteria and cause changes in the mucous layer that lines the gut. They contribute to low-level inflammation that promotes changes in cells of the digestive tract, including in the colon. (ref)

In addition, people with SIBO or IBS often experience digestive distress from consuming gums. If commercial almond milk doesn’t seem to “agree” with your belly – it is likely the result of gums added to the product.

Until now, the alternative to purchasing commercial almond milk has been to make your own. But this takes planning and a good bit of waiting, because most recipes call for the almonds to soak for 18 to 24 hours. But there is another way that is MUCH faster and easier…

In a recent experiment with my beloved Instant Pot electronic pressure cooker (which turns out mouthwatering meals like Fork-Tender Whole Pressure Cooker Chicken and Melt-in-Your-Mouth Pot Roast in a fraction of the time of traditional methods), I discovered a very simple way to produce thick, creamy and highly-bioavailable almond milk – in just 20 minutes!

The process is easy. The results are superior. And if you opt for conventional almonds, the cost will be about $1.50 per quart (25% less than store bought). If you use organic almonds, the cost will be about the same as what you would pay in the store. For what it’s worth, conventional almonds are just fine as almonds are a low-pesticide crop and the nuts are protected in the shell while on the tree.

And these are not the only benefits, because the almond milk you make using the Instant Pot will provide more nutrients, fewer anti-nutrients… and you won’t have to be concerned with the added “ingredients” in commercial brands.

You see, soaking almonds doesn’t just prepare the nuts for “milking.” It is also very helpful for reducing anti-nutrients, like phytic acid and lectins. According to Weston A. Price Foundation, soaking nuts for 18 hours can eliminate most of the phytates. (ref) And that’s a good thing, considering that we absorb approximately 20 percent more zinc and 60 percent more magnesium from our food when phytic acid is absent. (ref)

But when you soak the nuts under pressure, you can achieve even better results in minutes.

Now that you know the benefits of making almond milk in your pressure cooker, here’s how you do it…

To make this recipe, you will need:

If you wish to add a bit of flavor or sweetness to your almond milk, you may also want to include organic vanilla extract, sea salt and a sweetener (like stevia extract). Close and lock the lid. Set the pressure to high and the time to 1 minute. When the time elapses, do a quick release or natural release.

Pour the almonds into the strainer and rinse well. Discard the cooking liquid. Your pressure-soaked almonds will be plump and soft… Add the pressure soaked almonds to a high-powered blender with 4 cups of water. Blend on HIGH for 2 minutes. It will look like this… Then squeeze well (with clean hands!) to extract all of the nut milk.

Transfer to your lidded glass storage container and keep in the refrigerator for up to 4 days. For longer term storage, consider freezing in smaller containers or making “almond milk ice cubes” that are at the ready for your favorite smoothie or creamy recipe.

A quick and delicious way to make almond milk at home! 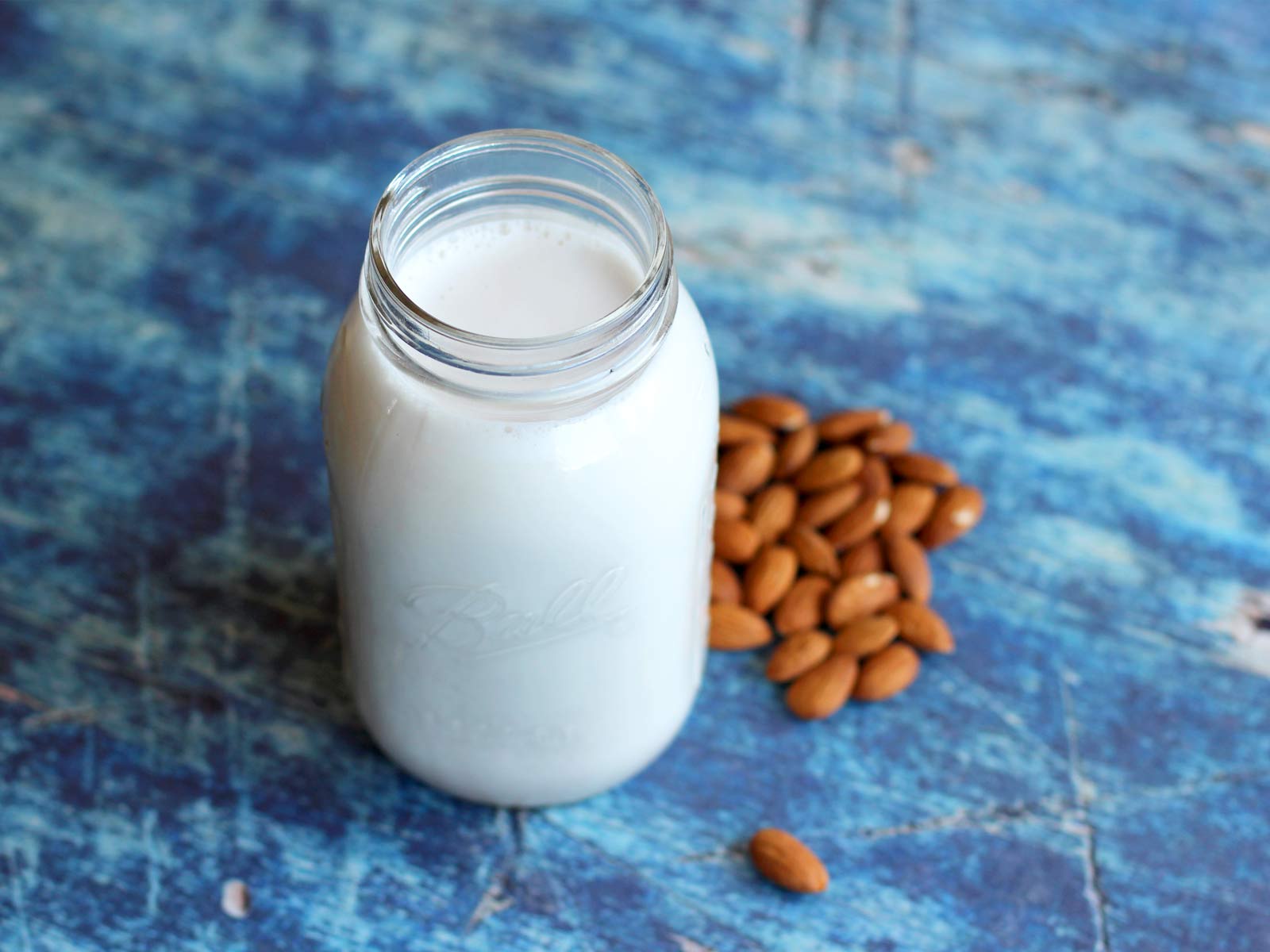